Do Queer People Belong in the Church (Part One) 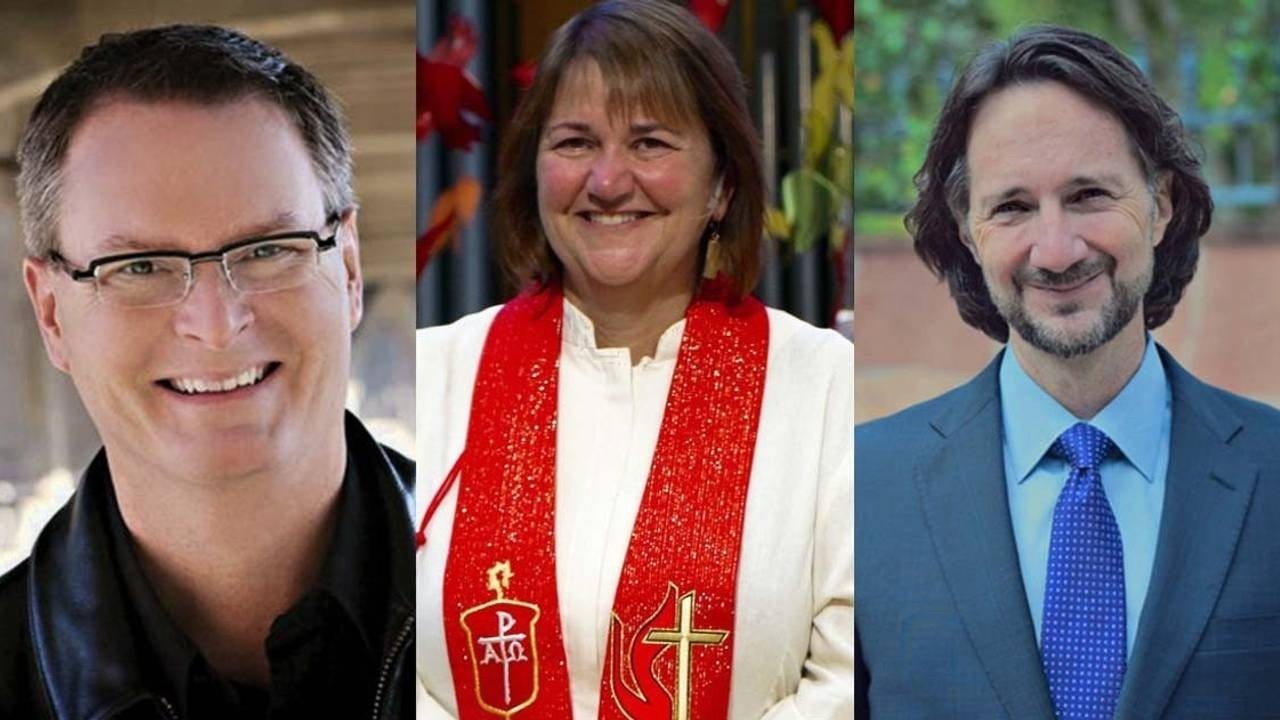 LGBTQ rights have taken center stage in the struggle over the future of America's second-largest Protestant denomination. Heading into this month's Special Session of the General Conference to vote on the marriage and ordination of queer people, conservative and liberal United Methodists have reached a stalemate. Can unity prevail, or is it time, after 40 years of debate, to split up? On this episode, Maybe God host and pastor Eric Huffman sits down with some of the key players on all sides of the debate, including the church's first openly-gay, married bishop, Karen Oliveto, the founder of the largest United Methodist church in the world, Rev. Adam Hamilton, and a leader of the conservative side, Rev. Rob Renfroe.

"WE'RE NOT A SOFT DRINK COMPANY. WE'RE NOT TRYING TO COME UP WITH ENOUGH FLAVORS TO PLEASE EVERYBODY BECAUSE I REALLY WANT TO SELL THIS PRODUCT. NO, I HAVE SOMETHING THAT I BELIEVE IS THE TRUTH. AND SO THAT'S WHAT I HAVE TO OFFER THE WORLD. AND I KNOW IT MAY BE BOTHERSOME OR OFFENSIVE TO SOME PEOPLE BUT I CAN'T CHANGE MY PRODUCT TO GAIN MARKET SHARE."
- REV. ROB RENFROE

ERIC HUFFMAN:Hey everybody and welcome to season three of Maybe God. Today, we're talking about the second largest protestant denomination in the world as it faces an existential crisis. With over 12 million members from the United States to Africa, and to the Philippines and Korea, the United Methodist Church is part of an even larger Methodist movement that goes back almost 300 years to a young Anglican priest named John Wesley. Wesley stood just five foot six and was frail, but what he lacked in stature he made up for in courage. He faced constant contempt from the institutional Church of England. Wesley's religious elders interpreted his Christian zeal and his cavalier arrogance.
ERIC HUFFMAN:He often left his pulpit and the four walls of his church behind and delivered his sermons outside for all to hear. That was a violation of church law, but Wesley knew that some people didn't feel comfortable inside church buildings, and he was desperate for them to know how much God loves them, so he did it anyway.
ERIC HUFFMAN:Around 1730, John Wesley, his brother Charles and a handful of other theology students at Oxford University, started getting together regularly to pray and fast and study the Bible. They were so intense about God and the scriptures that their friends made jokes at their expense. That's where the word Methodist comes from.
DR. RANKIN:The term was a term of abuse, actually.
ERIC HUFFMAN:In those days, to be a Methodist was to be a Jesus freak. Dr. Stephen Rankin is a Methodist historian and the chaplain of Southern Methodist University in Dallas.
DR. RANKIN:They were working diligently to be disciples of Jesus Christ. That methodical disciplined approach to the Christian faith was the subject of ridicule by some of the university students, so the word, the name Methodist was sort of applied to them as movements often do, they decide, well, okay, if that's what people call us, we'll just call ourselves that.
ERIC HUFFMAN:It started with Wesley and his friends simply striving for perfect holiness as they called it. They studied the Bible, preached the gospel, confessed their sins and forgave each other. They gave to the poor and visited prisoners and housed the homeless. It turned into one of the most transformative movements in the history of Christianity. The Methodist Church is Assemblies of God, the Nazarene Church, the Pentecostal churches, the Salvation Army and over 100 universities across America can all be traced back to John Wesley and the other Jesus freaks at Oxford.
DR. RANKIN:Wesley thought that's why God called Methodist into existence, to help renew the church and help people grow to maturity in Christ. And not just my own personal holiness, although that was very critical in Methodism, but also, the notion that society that our community should adopt principles that were life giving to everybody, so it didn't matter if this person was a Methodist or not, we cared about the whole community and wanted things to be right.
DR. RANKIN:For example, the abuse of alcohol was rampant in the 1870s and 80s and so Methodists took up temperance as a way of trying to take care of some of these social ills in the cities, in urban areas where the working poor were not making it. Methodists stepped in to provide education, housing, medical help, all kinds of things.
ERIC HUFFMAN:I've been a United Methodist my whole life, I'm a fourth generation Methodist pastor. Even during my time living as an atheist, I held on to the principles of social justice and equality that I learned growing up in the Methodist church. As a kid, I was completely unaware that in the upper levels of church bureaucracy, there was a growing divide over the issue of homosexuality.